We’re back in Paris for this post from fellow Parisian blogger, Rachel! Take a trip with her to one of the coolest districts in the French capital…

The history of Montmartre originated as a haven for artists to freely express themselves. Picasso, van Gogh, Monet are only a few that lived and called this place their home. Much like it is today, Montmartre is situated on a hill and while you’re still in Paris, you feel like its own little town outside of Paris. On most days, I get off at the Anvers Metro station and walk straight to Sacred Coeur from Rue de Steinkerque street. Touristy, crowded and unpleasant would be just a few of the things I feel as I walk through the souvenir shops and mob of people. Most guides will tell you to get off at Anvers as it’s the
quickest and most straight forward way to reach Sacred Coeur. But there are more scenic routes that I want to share with you for a more pleasant experience. Just get your walking shoes ready!

Inspired by a delicious cup of coffee, today I decided to get off at Pigalle and walked to a new coffee shop to meet a friend. Cuillier offers a chic cozy feel with wooden tables and highchairs to sit by the window. I love Cortados as it gives you the perfect proportion of milk to coffee and this one was not a disappointment. You have to try the Pistachio cake as it was absolutely to die for.

Next, we decided to walk up Rue Duratin where there was the Marché aux Puces, weekend flea market, in full action. Comprised of several different markets varying in price and quality. We saw all kinds of interesting things for sale including books, clothing and shoes. You could probably spend a good solid two hours walking around and looking through the items. As you cross Rue Tholozé, walk right on Rue Lepic, and you will find one of the remaining two windmills in Montmartre dating back to the 18th century. Moulin (French for windmill!) Radet sits above a restaurant called Moulin de la Galette. In the 1800s, this restaurant hosted entertainment, wine and bread made from flour grinded by the windmill. Artists Renoir, van Gogh, and Pissarro frequented this establishment during their time. I bet it was an amazing atmosphere!

When you see Rue Girardon, head north and you will find the infamous Place Dalida. An influential Egyptian-Italian French singer, this is a small square to commemorate her as she was the only European singer to win the “World Oscar of Recording Success” twice and sold over 170 million albums and singles worldwide. Make a right on Rue de l’Abreuvoir and you will see a row of beautiful houses lined in pink. The most notable one is a lovely Italian cafe/restaurant called La Maison Rose. This former cantine was frequented by renowned artists like Albert Camus, Suzanne Valadon and Maurice Utrillo. 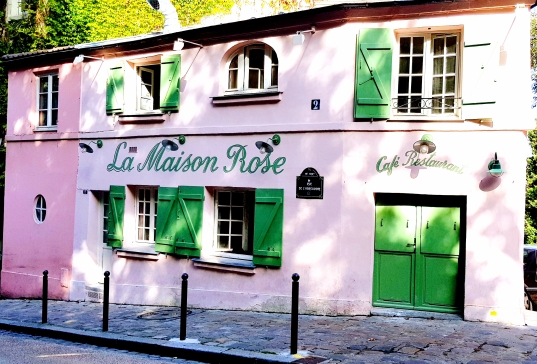 A quick left on Rue des Saules and then a right on Rue Saint-Vincent, you will see a beautiful park with a stunning view of the Sacred Coeur. Square Marcel Bleustein Blanchet is only known by locals and very few tourists come here. Snap as many photos as you can as this will be the best shot you can get without the heads of tourists.

Continue left on Rue Lamarck and start descending down on Rue Caulaincourt. This path will take you straight to Montmartre Cemetery. Recently, I’ve grown fond of cemeteries in Paris as the tombstones are unlike any that I’ve seen in the US. The second most famous Cemetery in Paris, you can walk around and gaze at century’s old tombstones with intricate designs and details. On a Saturday, it is not crowded and only a few tourists linger around in certain spots. I find it to be quite peaceful and only slightly morbid.  My favorite tombstone was a modern greenhouse surrounded in glass and beautiful flowers inside. This is the tombstone for Michel Berger, a famous French Pop Singer/Composer. You may know him from his song “Salut les copains” and “La Groupie du Pianiste”. He passed away in 1992, but Michel Berger is still remembered today as one of the most influential French artist of his time.

Finally, I couldn’t leave Montmartre without snapping a photo of an Avenue with the same name as me. Avenue Rachel was named after an actress who specialized in tragedy roles in the 1800s. Ironically, she is buried at Pére Lechaise and you could find her tombstone by her surname in Division 7. Although I’m not an actress who specializes in tragic roles in the 1800s, I have taken a strong liking to the dead, to the
artists and to what Montmartre represents.

Thanks to Rachel for this wonderful piece! If you want to follow more of her adventures then check out her blog at : https://itstimefortraveltime.com/

View all posts by morenativethanthenatives

3 thoughts on “Paris: The Local’s Guide to Montmartre”

More Native Than The Natives

More Native Than The Natives